We awoke before the train arrived in Waverley station and could see cows, sheep and lots of green. Ronnie Hinds met us at Waverley. We hadn’t seen him for 20 years but he’d hardly changed. We found a coffee at the train station then went to see what might be open for breakfast. We ended up at Henderson’s a vegetarian restaurant.

After breakfast, Ronnie was our tour guide for the morning, taking us to the Edinburgh Castle. 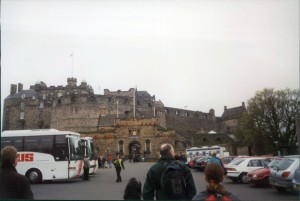 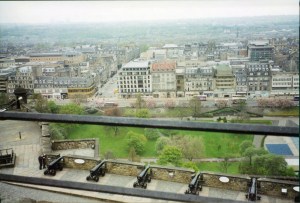 Waverley Stn on the right

We walked down the Royal Mile with Ronnie pointing out various sights and places to shop. We stopped at Clever Dicks for a pint, then Ronnie needed to leave. 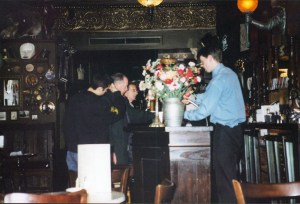 bat bought at the Castle
We walked down to the end of the Royal Mile to Holyrood Palace and took a tour. 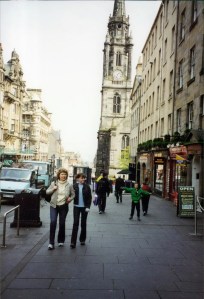 We then looked around Holyrood Abbey ruins. 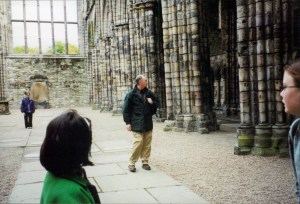 We walked back up the Royal Mile to look for somewhere for a late lunch. We were turned away at most pubs because the girls couldn’t be served.

We ended up at the Balmoral Hotel at the Palm Court where we could get sandwiches, tea and beer.

We returned to Waverley where we had stored our luggage and got into a taxi for the short trip to Bonny Rigg where we were staying at Dalhousie Castle. The kids were in a room at the top with a double bed and two singles. One of the singles was in a loft. They were impressed with the sparkling water, cookies and chocolates in the room. 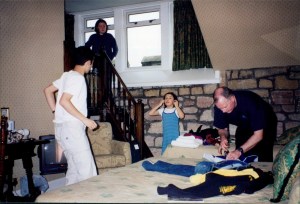 Scott and I were in a ground floor room. We discovered the heated towel racks after a shower. Bonus! There is a spa at the hotel but we didn’t have time to use it.

Before dinner, we went to the Library for drinks and where we ordered our dinner. Sidney liked the hidden door behind bookshelves where the bar was located. 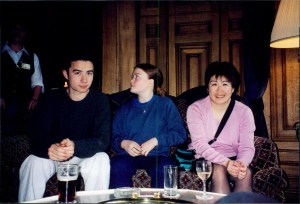 Dinner was served in the Dungeon where we ate with two armoured knights surrounded by stone walls.

After dinner drinks were back in the Library.