When we took Allie to Groningen, we were in Brussels the day before we had to depart from Amsterdam and some of our luggage was in Groningen. The train we were on leaving Brussels encountered an accident on the tracks. The consequent delay and worry about picking up our bags and getting to Amsterdam is something we now try to always avoid by getting to the city of departure the night before.
So we’re returning to Vienna before our Thursday morning flight.
Sidney had a morning orientation to her intensive German for international students course but met us before noon. After checking out, we headed out for lunch to the K & O store, Kastner and Ohle (umlaut over the O), where there’s a restaurant on the top floor overlooking the city. 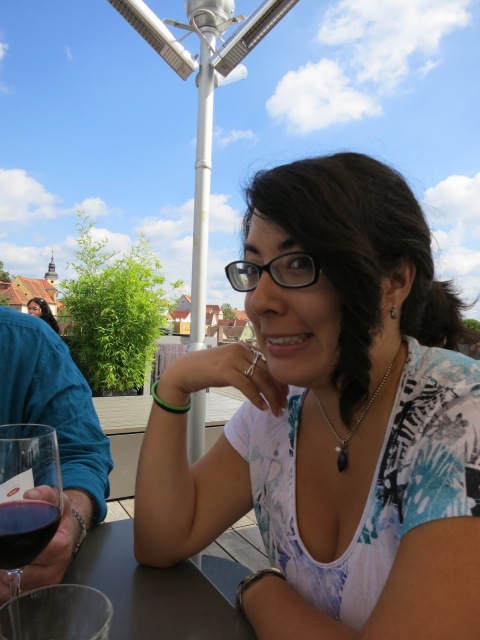 From there, we walked some of the streets we had not been along in the Inner Stradt:

Sad to leave Sidney but we’re sure she’ll adjust and adapt.
The train ride back, again, was scenic:

We arrived at the main station for Wien Meidling, a place we failed to see when we left Vienna. The place is a madhouse of activity as the station for train, underground, bus and who knows what all else. We walked a long ways to find the taxi stand where we were originally dropped last Saturday.

Twenty minutes later in the early evening, we were at the airport hotel, a fairly large chain hotel, where we had our last Vienna meal:

Tomorrow, it’s back to Calgary. We’re worrying about all we didn’t accomplish with Sidney–no bicycle, no bank account, no working Internet or mobile phone service, no desk lamp–but we expect she will eventually achieve everything without her parental assistance. We did leave her with almost all our Euros. Between the two of us, we have 8 Euros. Bottled water, at times, has been ridiculously expensive–over 2 Euros for a small bottle–we may have to resort to wine only on the travels home.