Today was devoted to attending an Arsenal Football Club match.  We got tickets for Arsenal v West Bromwich Albion, a team which was just elevated to the Premier League this season.  The abbreviation for the match was ARS v WBA.  Thus, I declared the day to be Ars-day.

We headed out to the northeast of London in the late morning.

We enjoyed the architecture along the walk to the tube station. 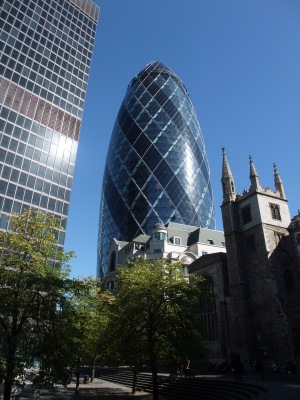 When we got to the Arsenal stadium area, we found one of the shops where Scott could buy himself an Arsenal t-shirt.

We tried to find a pub serving food, but no luck.  After pints in a pub and a sandwich in a small shop, we watched the teams warm up before we found our seats in the stadium. 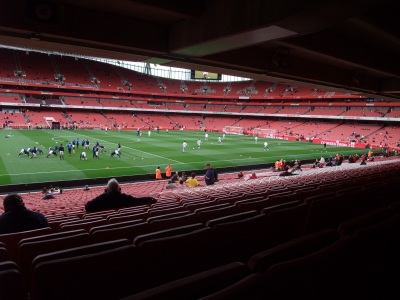 teams warming up
view from our seats

Unfortunately, most of Arsenal’s stars were injured and sitting behind the team.  Here’s my photo of Thomas Vermaelen, Cesc Fabregas and Theo Walcott sitting on the right of their team just behind the white bar. Not included among the injured in my photo was Robin Van Persie.  So in the end, Arsenal lost. 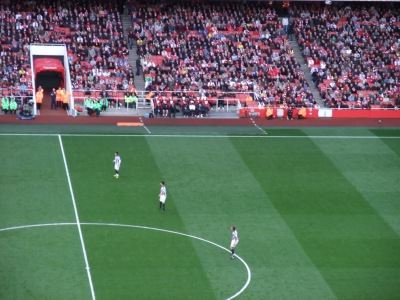 After the game, we looked for the brick that Robin, Allie and Sidney bought for Scott and had installed on the grounds of Arsenal stadium.

the location of the brick
Scott with his brick

After the crowds thinned, we headed for the tube station to find they were closed.  Why, when most of the 60,000 plus crowed would go home on the tube?  Instead we walked to the overland train station enjoying some grafitti in the Borough of Islington,

and in the Borough of Hackney 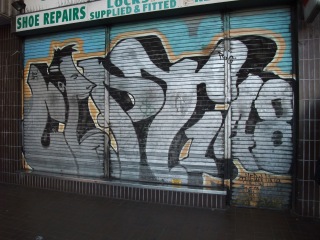 Dinner was at Dawaat on Brick Lane for some curries.