This hotel has no restaurant or breakfast room. It’s just 23 rooms in a former cardinal or some Catholic big wig’s former palazzo. From the outside it looks small but there’s five floors and they deliver a continental breakfast to your room. In our room, we can enjoy it with a view out the window:

The room was described as a triple, double bed with single in a loft, but the single is up another flight of steps with its own door and bathroom so it gives us more space and privacy and sound proofing. There’s also a small terrace which we hope to try out if it warms up. It must have rained last night because the tiles are wet and the sky is still grey.

After breakfast, we headed south to Campo de’ Fiori and the market which runs in the morning selling everything from fresh produce to clothes. 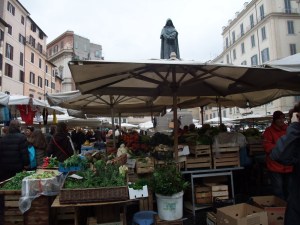 The statue is of a brooding Giordano Bruno who was burned at the stake for believing the sun was only one of a number of stars in the universe. Bruno’s fate gave Galileo some cause to worry.
From Campo de’Fiori we walked south about 3.5 km to the church San Giovanni in Laterano which was the seat of the popes before St. Peter’s was built. We first walked past the Vittorio Emmanuele II monument built in the late 1800. It’s a monstrosity that Romans call the Wedding Cake and was much loved by Mussolini as a pulpit for Fascist events.

From there we walked around the Colliseum: 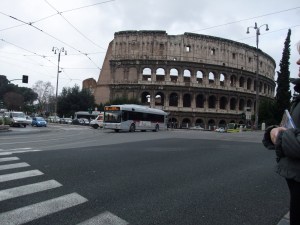 And then to San Giovanni in Laterano which has one of the 13 obelisks in Rome in front in its piazza:

It was the first Christian basilica built under Constantine started in the 4th century and undergone a lot of rebuilds and additions although the basic rectangular shape is still evident inside.

There were a lot of chapels some of which prohibited photos or entry because mass was going on. Saw a lot of men in long monk outfits. I’m sure there’s a name for those robes but I don’t know what it is.
I liked this doorway and think it might have been a Borromini design, one of the last architects to do much alteration to San Giovanni: 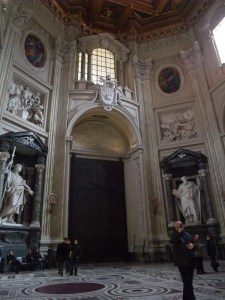 You can see the elaborate mosaic tiles in the floor.
From there we went back toward the Colliseum and uphill to San Pietro in Vincoli where a Michaelangelo statue of Moses is inside. Except it was after noon when we arrived and the church was closed until 3:30 so we headed on to Santa Maria Maggiore, another large old church started in the 5th century and much added onto. Some think this is the most beautiful church in Rome with many original medieval mosaics and lots of gold gilding which doesn’t show up well in my photos without a flash. 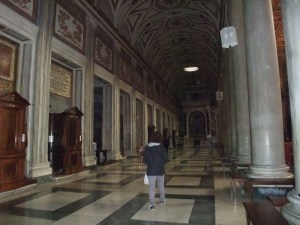 After looking inside, we needed some lunch and went to Taverna dei Fori Imperiali where we had been before in 2007 except they’ve moved. We got the puzzle of trying to find the place on a street where the numbers have no logical order. Eventually we were able to sit down for the lunch pasta specials, veal, vegetables and truffle on parpadelle and ravioli with pecorino, walnuts and truffles for me. 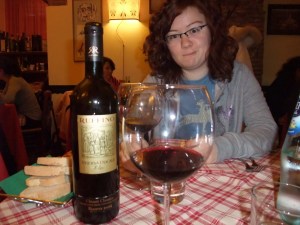 After lunch we went to Il Gesu, the first church built for the Jesuits. Like 2007, we couldn’t get inside because the doors were locked and there was no sign indicating when they would next be open. We did succeed in going into the Pantheon which is a church, Santa Maria, something about martyrs, but no one calls it that. Lots of tourists inside unlike the churches we’d seen earlier.

In the evening, we went to a wine tasting at the home of Hande Leimer, a sommelier who runs a wine tasting business. She’s of German background, grew up in Turkey, educated for a while in the U.S. and moved to Rome when she wanted to get into the wine business. We tried 7 wines in styles and from areas which was mostly new to me including a dry sparkling wine, a Sicilian attempt at Bordeaux style and a Umbrian red which resembled Brunello. The other tasters included a couple from Isreal, a woman studying to be a sommelier and an American exchange student.

After, we had pizza and a house red which was made acceptable for drinking by chilling it. And better yet, Allie paid for it. We had room after to go to San Crispino, considered one of the best gelateria in Rome and finally sample some gelato.