Our flat was near a Monoprix, a small chain of grocery stores where we were able to get basics for meals, snacks and even alcohol. The French are so civilized. It was also around the corner from a very good patisserie where each morning, we would take turns to pick up croissants for breakfast. 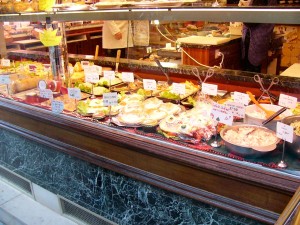 About noon we went for a walk west of our flat. Neuilly technically is a suburb of Paris, but is immediately adjacent to the city and directly extends it. The area is composed of mostly wealthy, residential neighbourhoods, as well as the headquarters of many corporations. We picked this area because we could find a flat which would accommodate 6 people (we thought Robin’s friend Chris might join us), something nearly impossible in the center. We could easily walk to the Seine River and along the path as well as onto a little island in the river. The area across the river is called La Défense where many office towers are located. 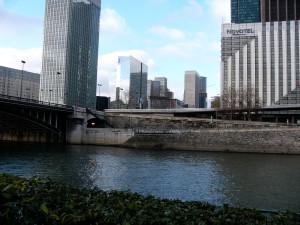 path by the river 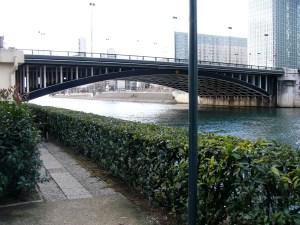 We then walked to the Bois de Boulogne, where Sidney chased pigeons. The Bois de Boulogne is a huge park, over 2000 acres, and at night, areas form a red light district. We weren’t there chasing pigeons at night so never saw that. 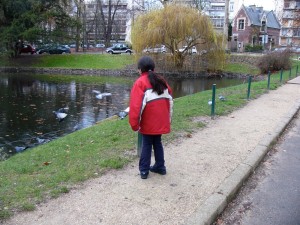 We returned to the flat and waited for Robin to arrive, which he did about 3:00 p.m. We had an afternoon snack of cheese, baguette and wine. 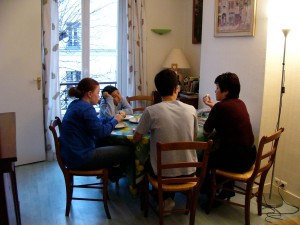 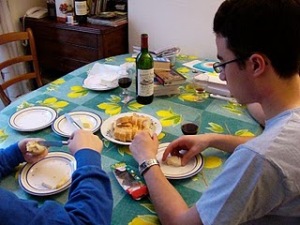 Then off to the Metro. The station closest to our flat was underground in the middle of the wide Avenue Charles de Gaulle. The Metro allowed us to get to the centre of Paris very quickly — 7 minutes to the Louvre, which is over 4 miles away. 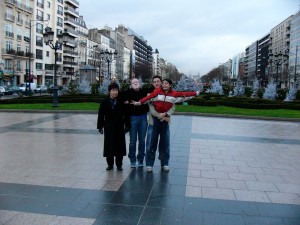 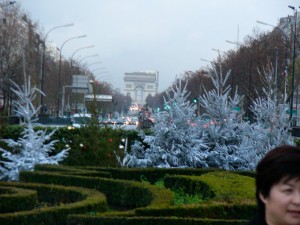 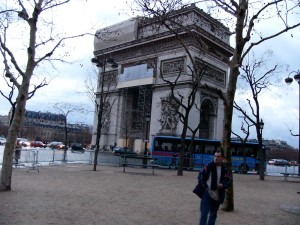 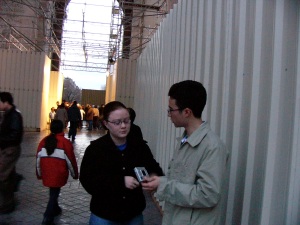 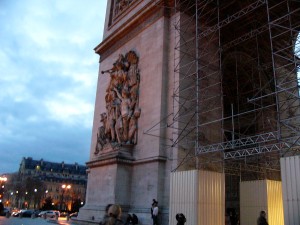 The elevator to the top was closed during restorations but we looked around and watched the lights come on as the sun set. 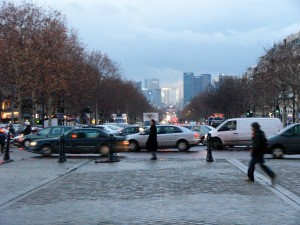 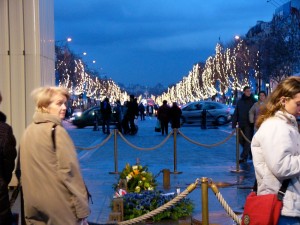 Back on the Metro, we went to the Eiffel Tower. 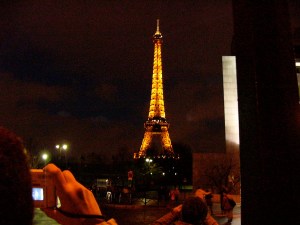 There are two elevator trips needed to get to the top. The first takes you to the troisieme etage, where there’s a gift shop and restaurant. You get off the first elevator and take a second elevator to the top. You get one ticket and different corners get taken off as you enter each elevator. 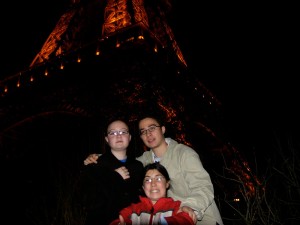 In the line for the second elevator, Sidney couldn’t find her ticket. We emptied her pockets, found 25 candy wrappers, metro tickets, a movie ticket stub, and pieces of paper but no Eiffel Tower ticket. I explained to the elevator attendant (in French!) that she had lost her ticket. Luckily, they let Sidney continue. So we were able to go to the summit and look around at Paris lit up at night.

It was Sunday and we couldn’t find an open restaurant near the Tower. We ended up having dinner back near the flat at Le Village à Neuilly. I couldn’t believe how good the creme brulée was at such a tiny suburban restaurant.