My flight didn’t require that I leave for the airport until 2:30 and Allie, who was heading to Naples had choices every hour, so we spent the morning looking at shops and basically trying to see if we had walked along every street in the area. Allie found some grafitti she hadn’t photographed and I found a church, Santa Maria della Pace, which I think was designed by Pietro da Cortona.

Across the Piazza della Pace was a wall with some trompe l’oeil windows: 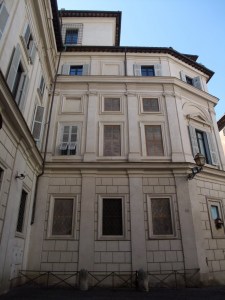 On top of the next building was a funny looking tower which appeared to have blue and yellow balls on it.

Bought something for Sidney at this shop which has no name on the outside. Sid, you’re gonna have to wait to find out what I bought. 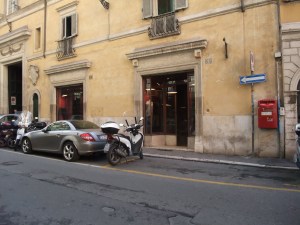 We had lunch where Allie could get some clams and I could have a last Brunello di Montalcino.

Followed by our last gelati in Rome from Frigidarium gelateria. 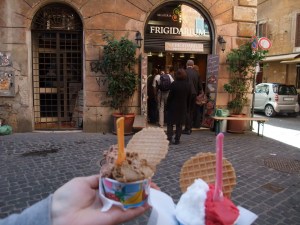 We returned to the hotel to pick up our bags. I now have an extra bag filled with shopping and stuff Allie does not want to carry around with her. We took a taxi to the Termini train station. It was 2:35 by the time we got there so Allie just hopped out and I carried on to the airport. I almost felt like crying when we said goodbye. I must be getting old. We’d had such a good time, it was sad to have it end.
The long slow queues in Rome airport cured any mushy feelings I had. Moreover, my flight left late because they needed to reroute through Switzerland, Germany and Belgium because some French strike was going on and BA did not want to fly through French airspace.  After pasta, vino and gelato, I fell asleep for part of the flight. We landed late and it was about 9:00 p.m. before I got to my hotel which is about 1 km from Robin’s flat.
Allie sent a message saying she’s in Naples. Robin joined me at the hotel while I had a sandwich and we shared a bottle of wine since, other than one bite of rubber microwaved chicken on the plane, I hadn’t eaten since noon hour.

It’s now after 1:00 a.m. and I’m trying to digest, write this blog, all while watching the women’s gold medal game. It was hard to follow Olympics in Rome with tv in the hotel only showing Italian channels and a slow internet connection making online reading difficult. On the other hand, I haven’t had to see Stephen Harper on tv. Woo hoo! We won! I gotta get to bed.