We think we now have the train schedules figured out and the train from Lucca to Rome via Pisa is going to be faster than going through Florence.
We’re up at 6:00 a.m. to shower, have coffee and take the garbage out of the apartment.

It’s very quite on the walls in the morning and we’re sad to be nearing the end of our trip. It seemed easiest to walk to the train station rather than call for a cab, but given the weight of my pack, the kilometre walk was quite a work out.

When we get on the Regionale train from Lucca to Pisa, we’re both sweating although the others riding in the same car, who look like university students, not only are not sweating, many have sweaters and scarves on. We have another brief glimpse of the Leaning Tower which comes into view from the train as we pull into Pisa Centrale station.

We get our tickets for Rome then go outside the Pisa train station to cool off. We’ve brought fruit with us, so eat that and buy drinks from a cart.

We’re taking first class to Rome. For two of us it is €94 on the Eurostar. The difference in the seating is not particularly noticeable from second class on the Eurostar. There’s more room for luggage and there’s extras like a plug in for headphones, for a computer, and the drinks (non-alcoholic) and biscotti cart is free. And the shades go up and down on an electric button, which Scott leans against a few times and startles me (and worse, interfers with the view). The toilet is roomier, but no better smelling. Very few stops are made during this trip.

We get to Rome, avoid a gypsy cab driver, and are at Hotel Eden [Via Ludovisi 49, 39.06.478.121] by noon. They don’t have a room ready, so we deposit our baggage and head out for some lunch at Gina [Via San Sebastianello, 7a, Rome tel: 06.678 0251], which we had tried to go to before when it was closed. This time we’re early for lunch, so we’re in. The look of Gina is very different from other Italian restaurants we have been in. Very white, clean lines, abstract paintings and pale blue cushions on the seats. Scott admires the hand blown water glasses.

We have a bottle of vino rosso (why stop now on our last full day in Italy?) and have an antipasti misti, which is very tasty. It includes the palest orange smoked salmon I’ve ever seen. Scott has a mozzarella and fresh tomato pasta and I have tuna, corn and fresh tomato pasta. They come without sauce but we see others taking the olive oil, salt and pepper and dressing the pasta themselves. We try it and because the olive oil is good, it makes a nice light tasting pasta, but we eventually realize it is also quite filling. The lunch menu is mostly salads, pasta, and panini. What we can see, all looks good.

By 1:00 pm, the place is packed and we’re the only people not speaking Italian. It seems very popular with locals despite the fact that it is close to the Spanish Steps, yet this street has no tourists wandering along it. A number of the diners are men in suits. There’s an expensive private school down the street and some of the diners are teenagers in their school uniforms sitting with middle aged people, presumably their parents. One of the school girls orders roast beef. She gets a plate of thinly sliced rare roast beef on rucola. She puts on olive oil, salt and pepper and digs into the rather massive amount of meat. We’re enjoying the ambiance of hearing nothing but excited Italian chatter and watching the very well dressed older women, many of whom are dining inside with their sunglasses on. By the time we leave at 2:00 p.m., there’s a line up outside the door.

We spend the rest of the afternoon shopping (a fare le shopping, Alessandra and Sara told us is the expression). Scott revisits Davide Cenci and also goes in pursuit of a lone column we had seen on Monday, April 2 because he wants to take a photo of it as well as of a cute little fountain with a man holding a keg. Despite all the stores I went into, incredibly, I fail to buy another pair of shoes. However, I did replace my raincoat which I left on the train. (I didn’t have to declare that at customs, did I? After all, it was a replacement for the very nice Burberry raincoat that someone, who found it on the train, now has. That makes it an exchange, doesn’t it?)

We agreed we would shop, then meet at the Trevi so we can each toss in a coin. I head there on Via Corso and am about to consult my map, but a guy asks me in Italian, what time is it. I can’t think of the numbers fast enough, so show him my watch. He says something else that I can’t understand and he asks if I speak Italian. Un pico, I answer. He then asks where I’m going and points to my map. When I say the Trevi, he offers to show me which street to turn down. He walks with me for about a block and a half and he chatters, asking me where I’m from and what I’ve seen in Rome. Everytime I say a little in Italian, he extravagantly praises my efforts. When we part, he tells me I look Italian. Helpful guy, but I think he was a little blind.

I get to the Trevi just before 5:00 p.m., our annointed time. As soon as I survey the area. I realize this is the stupidest place to have chosen. There are so many people, I have no idea how I’m going to find Scott. However, he finds me. We squeeze through the crowd to do the coin toss thing and head back towards the Spanish Steps as we do a bit more shopping.

Walking from Trinitá dei Monti down Via Sistina to get back to the hotel, a pigeon poops on Scott. That more or less ends the shopping as Scott now needs to get to his luggage and get a new shirt. Trying to find the wet wipe package from Scott’s pack while he has bird poo on his hand proves to be a challenge on the narrow and crowded streets. The passersby must have wondered what we were up to.

An unexpected short sprinkle of rain starts, although the sun shines. It begins just as we get to the hotel and stops shortly after it starts. 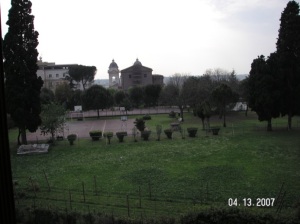 We go to our room, enjoy the views from the windows, which open, and uncork the last bottle we brought with us from Enoteca Vanni.

Hotel Eden is the most over the top luxury hotel we have stayed at. Tons of little extras in the room, and lots of attention like when I ask to use the internet and get walked through the entire process of logging on, yet it costs less than some Manhattan hotels we’ve stayed at. On the other hand, every extra you ask for, you also get charged for. The internet and telephone calls all are billed.

We have dinner reservations at their rooftop restaurant, La Terrazza. Before we go to dinner, we visit the bar for a pre-dinner libation. We have great views of Villa Borghese, St. Peter’s, Vittorio Emanuele monument and the Quirinale. As we sit, we watch the sunset and sip sparkling Italian white (for me) and a martini (for Scott). These come with a tray of nibbles including some delicious huge green olives. We eat them all and they give us another tray. Ooops. Forgot we’re here for dinner. The group next to us sound like a group of wealthy Americans.

We go next door to La Terrazza where we are shown to a window table. We get another waiter who indulges us by speaking Italian throughout the meal. When we hesitate or look confused, he translates. He admonishes me for translating for Scott. The menu is very French influenced Italian dishes. Not as innovative as Il Convivio or the Met in Venice but very good. 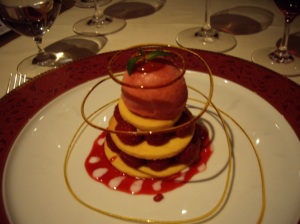 We order our last bottle of Brunello. For an amuse, we get a tuna sushi. I start with a pumpkin risotto which is divine. Scott has large shrimps on a “chitarra” spaghetti, a thicker spaghetti. I have fillet of beef which is very good and comes with a great layered eggplant dish. Scott has duck breast which is very flavourful but mild. For dessert, Scott orders a raspberry torte but I order chocolate flan with a basil chocolate center. It takes 26 minutes to prepare so we have another Brunello by the glass. The waiter apologizes that it is not as good as the bottle we just had. (This becomes ironic later when we’re back in Calgary having a bottle of the “not as good” Brunello and the waiter in Calgary says what an excellent choice it is.) The desserts come with sweet wines to accompany them. The choice of wines is perfectly matched to the desserts. We get little extra dessert things after. The restaurant is excellent but, of course, expensive. The setting and the food make a great last night in Italy.

By now it’s midnight and we need to get up early but we take a short stroll around outside. The weather has been practically perfect the entire trip. When we are back in our room, we see that turn down service includes cleaning up the clutter we left and putting out, not only chocolate, but bath slippers and a mat by the bed and a note with tomorrow’s weather prediction: sun and cloud and a high of 23.

The rolled up duffle bag I’ve been carrying with me finally gets unfurled and quickly filled with the day’s shopping. I hope the doorman won’t complain about the weight of my bags when we leave like he did when we arrived.

Although it’s noisy, we slept with the windows open.