We get up fairly early to catch the Eurostar train to Venice which is scheduled to leave at 9:45 a.m. We take a taxi because our packs are getting rather heavy. Okay, my pack is getting really heavy, yet all I’ve bought myself is a pair of shoes! We’re charged €4.70 for the ride but €2 for each of the bags. 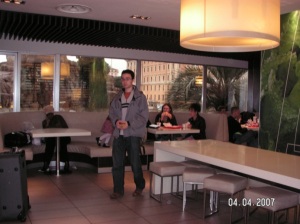 Robin and I check out the McDonald’s where you can view a piece of the old Roman wall which surrounded Rome. We use the self serve ticket machines. In Rome, they take a credit card. For three of us, second class, the total on the Eurostar is €153. After getting tickets, we stop for a coffee. Robin decides to try caffe correto, which is espresso with a shot of alcohol, usually grappa. On the ride to Venice, he regrets his choice. 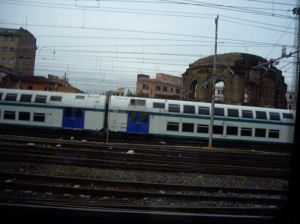 The Eurostar is generally the fast train but this one gets to Venice via Florence and Bologna and a number of stops between Bologna and Venice. It is scheduled to arrive in Venice at 2:17 pm, but it gets there just after 2:30. However, we took second class, which was considerably cheaper than first, and the seats are roomy enough and you can pick the seats you want. 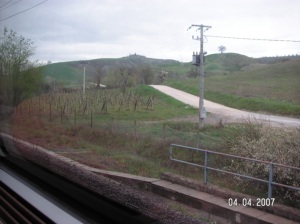