A five hour stop over ends up being a bit shorter because we arrive late. We go through passport control then down to the train station to buy a ticket into Frankfurt. As I am trying to figure out the ticket machine with its instructions in German (which I can’t read), some guy tells me which code to enter. It turns out that he told me how to get to the main station when I wanted two stops further on. In any event, took less than 20 minutes and we can get outside and walk. 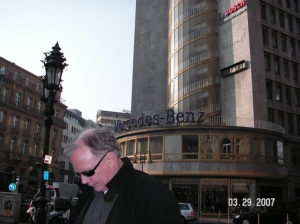 The time is just after 9:00 a.m. We don’t have time to do much but we walk down Kaiserstrasse, the main street leading away from the train station. The sun is out and the air is cool, which is good for helping to reduce jet lag. We notice the juxtaposition of old and new buildings, presumably a legacy from World War II bombing. Street vendors are starting to get set up and there are almost as many Starbucks shops on the street as Robson in Vancouver. Seems crazy for a country with a long coffee tradition to have an American chain so omnipresent. 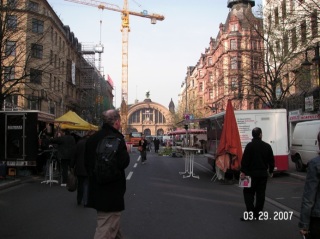 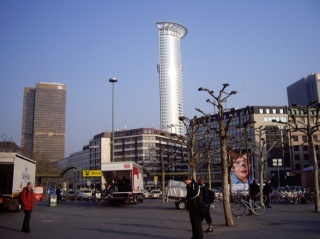 On the train ride back to the airport, two Russians get on, one with an acordian and one with a saxaphone. They announce they will play us music from their country. Some of the people in the car look very grumpy about this and more so when they finish and pass a hat. An announcement comes over the train car speaker saying that begging on the train is forbidden. It sounds particular remonstrative in German. 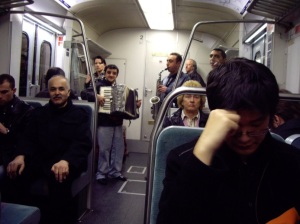